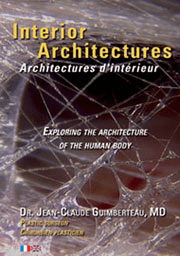 Exploring the Architecture of the Human Body

‘Inside Architectures’ combines new scenes inspired by two previous films, ‘Strolling Under the skin’, and ‘The Skin Excursion’

Drawing on High Definition new sequences filmed during surgical procedures using endoscopy, the movie sets out to show that the internal architecture of the body appears to be an ideal network made up of fibres, fibrils and microfibrils, and microvacuolar spaces which are more or less cellularised.

This can be demonstrated at all degrees of magnification, from the mesosphere to the microsphere.

Therefore, form can be described and interpreted as a global system…